There is considerable evidence that what hit the Pentagon was NOT AA-77. The Pentagon's security cameras show some aircraft being shattered by a missile automatically from one of the defense batteries that surround the Pentagon.

The Pentagon admits the aircraft came in low.

It did so to get under the radar that controls those missles.

It CANNOT fly that low and that fast due to the ground effect cushion that is formed.

757's have to stall, that is quit flying, in order fly that close to the ground.,

Cruise Missles and remotely piloted vehicles such as the US's Global Hawks, however , can.

There was a plane :

1.Many witnesses reported it. Browse along the witness accounts page. They saw a plane, they also reported jet fuel inside and outside, there was fuel inside a victim's lungs. Witnesses saw pieces of the plane's nose gear or some oxygen bottles. Air controllers (1 2) reported a plane aiming at the Pentagon.

2.It can be proved that the plane clipped five lamp poles on its way. As of the location of these poles, we can be sure that this plane had a minimum wingspan of 100 feet (30 meters). 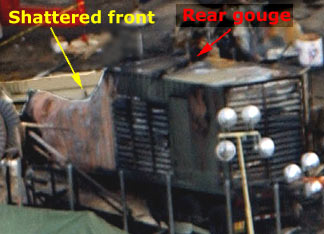 As in the Frank Probst statement, some pictures show that an emergency generator was shattered on its front and cut (gouge) on its rear top. It seems that both actions occured during the attack. I can hardly imagine a missile making this. (This Enercon generator is homed in a container, some kind like this)

The animation above was made using the exact measures and positions from the map below.

The original size and position of the generator is taken from this picture. 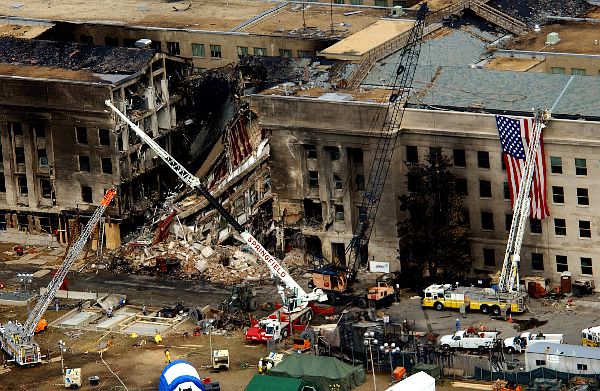 The right engine may have struck the front of the generator while the "flap track 'canoe' fairing" was cutting the rear (see also here).

Was it a Boeing 757-200 ? On looking at the next diagram I doubt that this flap fairing was responsible for the gouge. It's believed that the plane was banking left and the other flap fairing seems too close. Maybe it was another plane. Hard to say, still some work to be done.

It was a plane but it was also a missile. Missiles are flying bombs. Whether the flying engine is behind the bomb or around the bomb, what's the difference ?

Here we try to support that the plane that crash in the Pentagon was a plane bomb, thus it was not flight AA77. Flight AA77 had its transponder turned off. For 30 minutes it was not clear where it was (see UnansweredQuestions.org). We do not discuss the fate of AA77, instead we focus on the Pentagon evidences. The plane bomb was probably an airliner tarted up as an American Airlines airliner. It was modified as a missile, it was remotely and/or automatically controlled. There were bombs on board, mostly bombs with a directed explosion (shaped charges) These bombs pierced the wall, they were detonated one after another before the contact with the Pentagon and possibly after, inside the building. Here are others observers thinking about the same : Cheryl Seal : "The plane exploded and was essentially vaporized the split second before actual impact with the wall", Leonard Spencer about flight 11 : "It was a custom-built military plane carrying three missiles".

Maybe a too complex maneuver for flight AA77 :

Was this plane remotely controlled by a C-130 plane ?

As of UnansweredQuestions.org : Officials said that this plane was sent to intercept flight AA77. Remarkably, this C-130 is too slow for the job and it is the same C-130 that is 17 miles from Flight 93 when it later crashes into the Pennsylvania countryside. Thus, this C-130 was at the right places at the right time while lately scrambled military jet fighters were anywhere else. The pilot of the C-130, Lt. Col. Steve O'Brien, is later interviewed, but his account differs from the on-the-ground eyewitnesses.

Anyway, the plane did appear by the Sheraton hotel, the Navy Annex and in the west side of the Pentagon. From witness accounts, pictures, Silent But Deadly , Ron Harvey's works and topography we can draw quite precisely the trajectory.

full size The above picture is a computer-aided reconstructed scene. Plane before and front wall after. Done by Silent But Deadly

If the whole plane entered the building, we should see a hole in the front wall the size of the plane, like in the WTC attacks. We don't see this plane print on the Pentagon front wall, neither in the reconstructed photo above, neither in the original photos below.

Nevertheless, huge damages were reported inside, either by the Pentagon renovation manager and the American Society of Civil Engineers.

There's been some discussions about this wreckage (Dick Eastman, Rense, Pentagate). Some discussed the accuracy of the colors, the lack of horizontal line of rivets or the shape of the painting.

Many pictures of American Airlines Boeing 757-200 can be found at www.airliners.net. You can even see the original AA77 plane : N644AA. It seems obvious that the above wreckage comes from the plane's livery, the red and white "American" logo.

left side right side

From wich letter does this debris come ? Many agree that it can only match the shape of the 'n'. But even the 'n' don't match.

Moreover, in a discussion with Kjell Roald, we agreed that the rivets lines should stand horizontally as in the Airliners.net pic id 118463 or 352805. So the only match possible is the the 'c' (or 'e') as in the picture below.

"A huge jet. Then it was gone. There should have been parts on the ground."

There's been a long discussuion on this lack of debris. Where is the 60 tons plane ?

It seems the nose gear ended in the Pentagon A-E drive, the route between the C ring and the B ring, close to the plane exit hole. Captain Defina, Walker Lee Evey ).

But most of the plane has been changed into small pieces :

These metal 'confetti' have been blown up high in the sky :

500 meters from the Pentagon, combing the ground for debris

Some heavy debris were flung quite far :

How can a plane be changed in a confetti rain ? ... What about a bomb ?